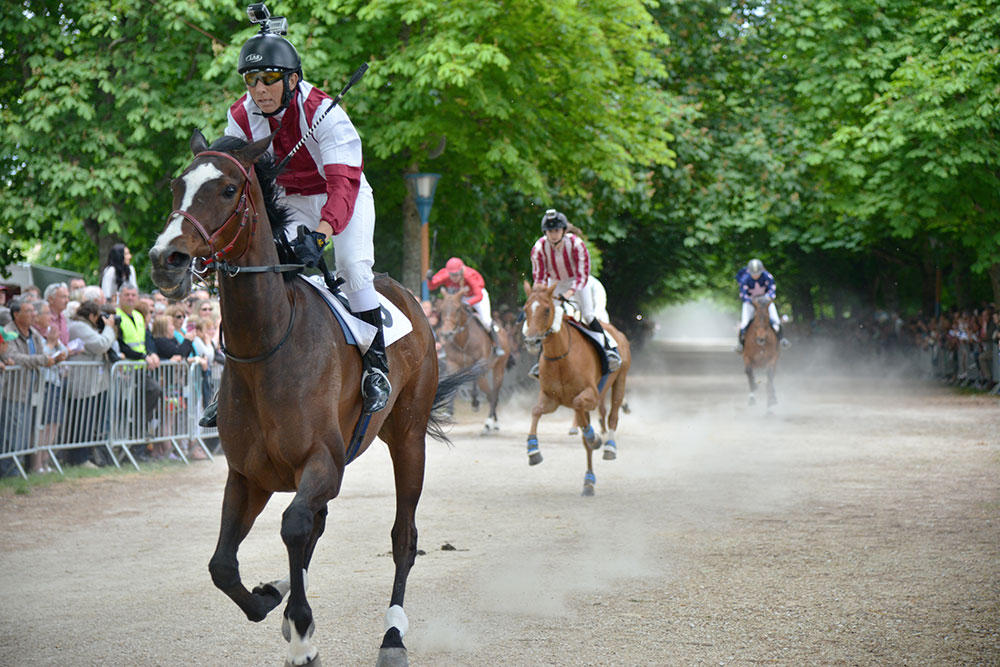 Auxois is a Country of art and history with its castles its walled cities and its spiritual and gastronomic heritage.
Become County in the Middle Ages, it is afterward joined into the duchy of Burgundy (Bourgogne). Its capital is Semur in Auxois.
At the heart of the green and wooded valleys of Auxois, a meander of Armançon profoundly collected in the pink granite enclose a headland in the steep sides where was established the castle of Semur.
The name of Semur appears in the history in 606 with the charter of foundation of the abbey of Flavigny signed in the castle already considered as old if we retain the etymology ” Séné muros “: old bulwarks.
Semur knows how to show her vitality while maintaining a tradition which already mentioned in 1552 Sébastien Munster: « the citizens of Semur are peaceful people, soft, good-humoured and charitable, living together in big concordance and who like hardly acquaintances of estrangers.«
Come to discover Semur with,its towers and its pieces of bulwarks, his old convents and his particular hotels, his houses to the sloping roofs and the Notre-Dame collegiate church
Semur is a Great Lady! She has titlesof nobility. She holds high her blazon which is azure in the tower carved by silver, in charge of an ecu in six pieces of gold and azure, in border of mouth.

Three chases that we run on foot, at a trot hitched or at a gallop.
Along the 2 112 meters of the course in hard-packed surface where quarrels the oldest horse race of France.

The oldest of three races : Hose

Since the environment of the XVIth century, Semur-en-Auxois enters the race every year

It is August 21st, 1566, that appears the first mention of the Race of Hose in the registers of deliberations of the city: “for Hose run the day after Pentecoste to attract the people to bring bestail and foodstuffs to the marchiet and méliorer the city, 3 deliver 13 grounds”.
A running the winner of which won a pair of knit hose.

Every year, except the periods of disorders, at the time of the Pentecost, Hose and other prices are exposedat the door Sauvigny to incite people to participate in this race and to invite the population to take part in the festivities, the games of skittles and the dances.
But in 1651, the running is deleted ” the runners expose themselves pointlessly to the death and throw themselves at the risk of the loss of their souls in resantants sets the forms of the former paganism “.
It will be updated only in 1978, to liven up the streets of the city.

Prestigious and renowned: the race of the Ring

About 250 years after the first race of Hose, Countess d’ Origny, in 1638, attends the show. it made a smothering heat this day, and the chatelaine was horrified by seeing the practically naked participants on arrival! She decides that the race, from now on, would be made on horseback, by people carrying sword. The first edition of the oldest horse race of France will take place next year on a course remained unchanged.
In 1651 we add the price of a golden ring ” until the value of 15 pounds “, as we can read it in the act of deliberation of June 1st. Next year, we give the order of the prices of the horse race: a golden ring, a scarf and gloves.
The Race of the Ring today:
She runs on the e-mail, the wide pedestrian path which for the time of a day, on May 31st of every year, becomes race track.
She gathers highly skilled riders, carrying tops the colors of owners and breeders of the region.
The riders have to travel a distance of 2 112 meters in a straight line on hard-packed surface. The specificity of the race of the Ring is that it quarrels at top speed and lasts no more than two minutes.
The cradle of the race
In 1995, a horse-race of feature of Auxois is added to the race of saddle horses. On May 31st, they are the first ones to position on the starting line of the course Charles de Gaulle. The riders in period costume and horses wearing colored necklaces oppose on 1 100 meters of route to win the silver Ring. A show amazing with these impressive but so elegant frames!
The awards
The prize-giving by the officials takes place in the yard of the city hall since the flight of steps.
The winner of the race of the Ring gains)a golden ring engraved in the weapons of the city, the price Mistou (owner today dead who during 30 years aligned every year one of its horses on the starting line of the race of the Ring) and a 400-€ envelope.
The second price is a scarf fringed by gold and a 250-€ envelope. Finally the third gains a pair of gloves fringed by gold and a 160-€ envelope.
As for the horse-race of feature of Auxois, the winner wins the prize Michel Cortot, a silver ring engraved in the weapons of the city as well as a 60-€ envelope. The second gains a bronze seal also at the weapons of the city and an envelope Of 60 € and finally, a medal of the city is awarded to the third with a 60-euro envelope.

The youngest last one race: the race in the Timbale mold :

The race in the Kettledrum runs at a trot hitched, too, on the 2 112 meters of hard-packed surface of the course Charles de Gaulle. it collects about ten drivers which are in confrontation in duets timed and checked by the judges and police captains because it is forbidden to them to turn the corner of five strides at a gallop.
The prices
For the XIXth century, awards of the race in the Timbale mold changed. The first one gains from now on the silver Timbale mold and 310 €, the second, a bronze seal and 190 € and the third, the medal of the city as well as a 160-€ envelope. 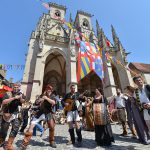 Fête médiévale May 13 and 14th